The NCCA logo is the Alab ng Haraya, (The Flame of Imagination), which symbolizes the wellspring of Filipino art and culture.

It is composed of two basic elements – the fire and the censer.

The fire is a stylized letter K of Philippine indigenous script that stands for kadakilaan or greatness. The fire represents the highest level of imagination and emanates from a three-tiered censer.

The three tiers stand for organization, economic support, and an orientation rooted on a thorough grasp of tradition and history, which the NCCA provides.

Done in gold to symbolize the immense wealth of Philippine culture, it was designed by the late Romeo “Boy” Togonon.

In 1987, then President Corazon C. Aquino penned Executive Order No. 118 creating the Presidential Commission on Culture and Arts. Five years later, in 1992, this presidential directive was enacted into law– Republic Act 7356, creating the National Commission for Culture and the Arts (NCCA). The original bill was jointly authored by Senators Edgardo Angara, Heherson Alvarez, Leticia Ramos Shahani, and Congressman Carlos Padilla.

The National Commission for Culture and the Arts (NCCA), Philippines is the overall policy making body, coordinating, and grants giving agency for the preservation, development and promotion of Philippine arts and culture; an executing agency for the policies it formulates; and task to administering the National Endowment Fund for Culture and the Arts (NEFCA) — fund exclusively for the implementation of culture and arts programs and projects.

The Commission together with the six cultural agencies works with the principle of partnership, collaboration and shared responsibility in achieving effectively and efficiently the implementation of cultural programs as well as maximizing of resources.

The NCCA was created to serve as the presidential inter-agency commission to coordinate cultural policies and programs.

The Implementing Rules and Regulations of RA 7356

Implementing Rules and Regulations of RA 10066

Approved during the Joint BOC and NAB Members Strategic Planning
at the MMLDC, Antipolo, Rizal on January 19 & 20, 2012 per Resolution Number 2012-345)

According to Sections 8 and 12 of RA No. 7356, the NCCA is created and mandated to formulate and implement policies and plans in accordance with the principles stated in Title I of RA No. 7356:

In general, the Commission shall undertake the functions of policy formulation, coordination, and grants assistance.   It shall also be an executing agency for the policies formulated.  Further, it shall exercise the following powers and functions pursuant to RA 7355, RA 7356, and RA 10066: 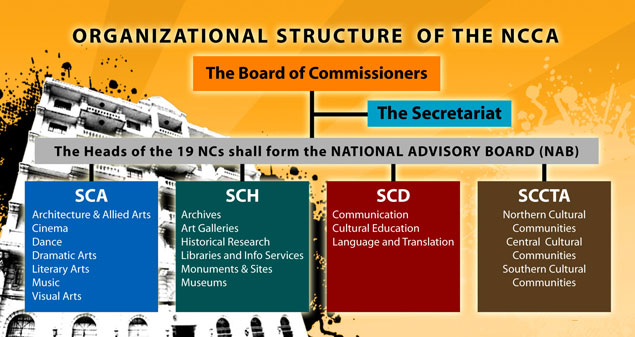 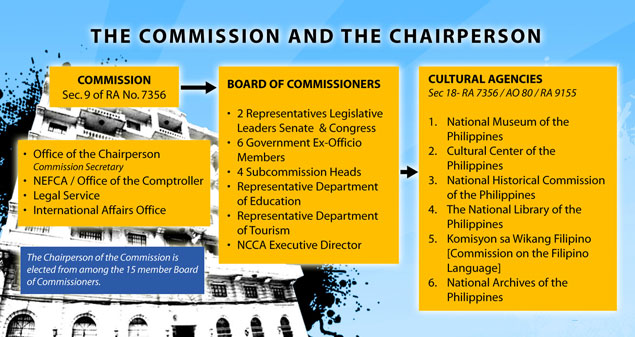 Nationalistic.  We strive to uphold the interest of the peoples of the Philippines and the country, which shall have priority over all other considerations.

Committed to Service. We commit to serve all people and institutions in conformity with the highest standards of excellence.

Competent. We believe in the continuous enhancement of the skills, competence and expertise of our personnel as basic right of every member of the organization to self-development and well-being.

Artistic and Culture Sensitive. We discharge our mandate with respect for the peoples’ cultural wisdom which defines their identity.

NCCA Board of Commissioners