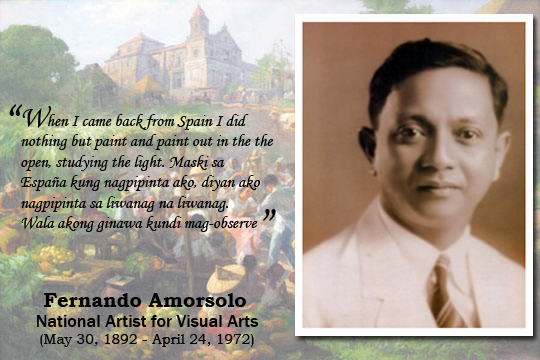 The country had its first National Artist in Fernando C. Amorsolo. The official title “Grand Old Man of Philippine Art” was bestowed on Amorsolo when the Manila Hilton inaugurated its art center on January 23, 1969 with an exhibit of a selection of his works. Returning from his studies abroad in the 1920s, Amorsolo developed the backlighting technique that became his trademark where figures, a cluster of leaves, spill of hair, the swell of breast, are seen aglow on canvas. This light, Nick Joaquin opines, is the rapture of a sensualist utterly in love with the earth, with the Philippine sun, and is an accurate expression of Amorsolo’s own exuberance. His citation underscores all his years of creative activity which have “defined and perpetuated a distinct element of the nation’s artistic and cultural heritage”.